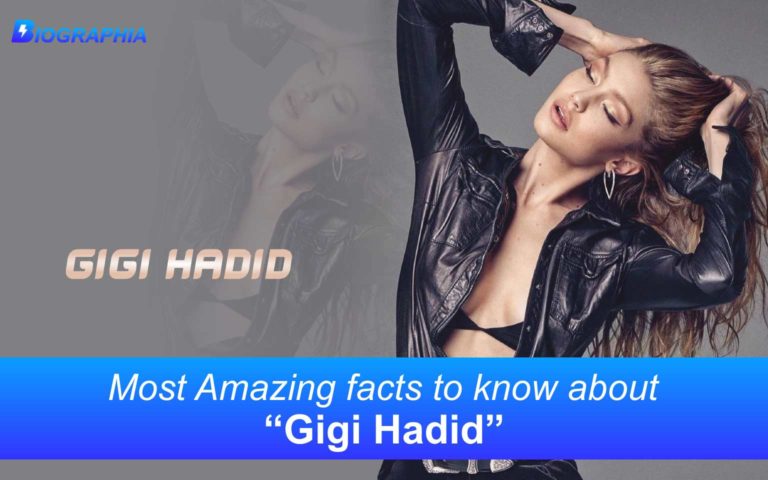 Gigi Hadid is a prominent American actress known for ravishing looks and an engrossing personality. She has even appeared in Tv shows like The Real Housewives of Beverly Hills and MasterChef.

In view of her sublime figure and scintillating beauty, she became the poster girl for Vogue’s magazine covers by featuring a record 35 times.

Through her unparalleled beauty, she added the flavours of glamour and sensuality in hit music videos like Bad Blood by Taylor Swift, Flower by Cody Simpson, and Pillowtalk by Zayn Malik.

Hadid is known for her exceptional modelling skills and extravagant fashion campaigns for renowned brands like  Versace, Valentino, Fendi, and Moschino.

Known For: Appeared on the cover of famous magazine ‘Vogue’ and made a cameo appearance in the movie Ocean’s 8 which starred Sandra Bullock, Cate Blanchett, and Anne Hathaway in the leads

1. Hadid was one of the many models, who was shortlisted for the 2017’s Victoria’s Secret Fashion Show in Shanghai, however, she was unable to appear on the esteemed fashion show as her Chinese Visa got cancelled at the last moment, due to her online video getting viral, where she tried to mimic Buddha in an inappropriate way which enraged the Chinese people and authorities and lead to such adverse actions.

2. Gigi Hadid was sued by independent photographers like Peter Cepeda and agencies like Xclusive, where she shared her photograph on social media platforms before seeking their permission. She was sued under the copyright infringement clause by the photographers and solicited for the profits derived from those photographs.

1. Her real name is Jelena Noura Hadid. While she was two years old, her mother affectionately began calling her ‘Gigi’.

2. Hadid in her High School decided to study criminal psychology as she found it new and quite unconventional, but soon dropped the idea and decided to pursue her childhood dream of becoming a model.

3. However, very few know that Hadid got her first modelling assignment when she was just a toddler, all thanks to the famous fashion designer Paul Marciano who featured her in the Baby Guess campaign

4. She has a sweet tooth and cherishes the art of cooking various delicious recipes. To hone her culinary skills, she even participated in Masterchef, a popular cooking reality Tv show.

5. Besides her appearance on Vogue’s cover page, she has also worked for various other prestigious magazines like CR Fashion Book, The Daily, Cosmopolitan, and Glamour.

6. Hadid is an established and extremely stylist celebrity, who has worked as a runway model for the leading fashion designers and houses of the world consisting of Versace, Tommy Hilfiger, Diane Von Furstenberg, and Fendi.

7. She is also a vehement social activist and has helped UNICEF in its efforts of helping children, even was at the forefront of the Black Lives Matter movement and has numerous times donated large sums of funds for charity.

8. She made a cameo in the heist comedy movie Ocean’s 8 which featured a heist sequence at Met Gala, in which plethora of other famous actors like Zayn Malik, Kim Kardashian West, Maria Sharapova, Alexander Wang, Liu Wen, Adriana Lima,  Lauren Santo Domingo, Sofia Richie, and Kylie Jenner also made the cameo appearances.

9. Hadid recently in an interview revealed that she suffers from an autoimmune disease known as Hashimoto’s thyroiditis.

1. Cody Simpson – Gigi Hadid and Cody Simpson met at the shoot of music videos titled Surfboard and Flower, and both developed an instant liking for each other. However, owing to certain personal reasons both stars split up after a two-year relationship.

2. Joe Jonas – Gigi Hadid soon after her break up dated Joe Jonas from the infamous pop-rock band Jonas Brothers and they both also collaborated in a music video. But, their busy life schedules and prior engagements made it difficult for them to take time for each other. Thus, after a brief dating period, they broke up and went separate ways in their lives.

3. Zayn Malik – Gigi Hadid and Zayn Malik are the true couples who fulfil the philosophy of being made for each other. Gigi Hadid has featured in Malik’s music video titled ‘Pillowtalk’ and even, both have appeared on the cover page of American Vogue. The couple, despite being intimate and in a close relationship, are yet to get married.