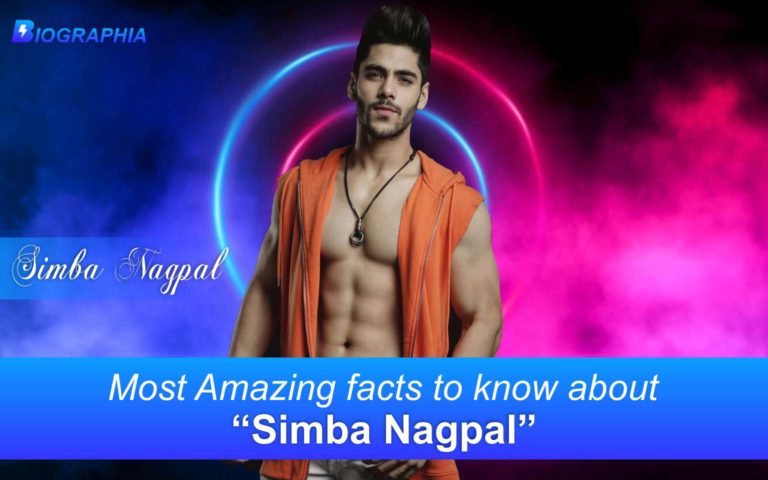 Simba Nagpal is a spunky and attractive looking model turned actor who is known for participating in the youth-based reality TV shows MTV Roadies and Splitsvilla.

He has also played the main role of Virat Singh in the hit TV serial ‘Shakti – Astitva Ke Ehsaas Ki’ starring Rubina Dilaik and Cezanne Khan in the lead roles.

His macho like personality makes him one of the most followed TV celebrities on Instagram with more than 2 lakh followers.

He will be seen as a contestant in the most popular Indian reality TV game show Bigg Boss 15, hosted by none other than Salman Khan.

1. Simba was born and brought up in New Delhi. He always wanted to try his luck in modelling and acting.

2. He first appeared on the famous reality TV show Roadies: Real Heroes which was hosted and mentored by Rannvijay Singha. But, was only able to reach till the culling round on the show.

3. He also appeared on the MTV Splitsvilla 11 hosted by Sunny Leone and Rannvijay Singha. He finished at the 9th position in the show. The season was later won by Shruti Sinha and Gaurav Alugh.

4. His claim to fame was when he bagged the lead role of  Virat Singh in the popular TV series Shakti: Astitva Ke Ehsaas Ki alongside Rubina Dilaik and Jigyasa Singh.

5. Simba shared a deep and emotional bond with his father. He didn’t know for 3 years that his father had passed away in an accident, as his mother hid the fact from him.

6. Simba seems like a brawny young man, but from inside he is soft, compassionate and emotional.

7. He has mentioned on his Instagram that he is a sapiosexual.

8. Simba currently is self-partnered, but if he ever commits to a relationship would base it on understanding rather than outer appearance and beauty.

9. He is a gym and fitness freak and considers that building muscles helps him to remain flexible and enhances his acting.

10. He recently purchased a luxurious car and stated that since his childhood he had an affinity with toy cars and bikes and it was always his dream to have his car as it gives him a  sense of pride, relief and satisfaction.

11. He will be seen as a contestant in Bigg Boss 15 hosted by Salman Khan and alongside other contestants, like Shamita Shetty, Karan Kundrra, Tejasswi Prakash, and Umar Riaz.

1. Simba when asked in an interview about his views on the intimate scenes in web series, he mentioned that he wouldn’t like to name controversial shows, which unnecessarily feature nude scenes and abusive languages to increase their watching and garner a large audience.

His comments were not accepted well by the netizens who trolled him for his remarks.

Monal Jagtani – Simba and Monal met each other on the sets of MTV Splitsvilla 11 and were soon rumoured to be dating each other. However, the couple were unable to keep their relationship intact and had to broke up due to personal reasons.