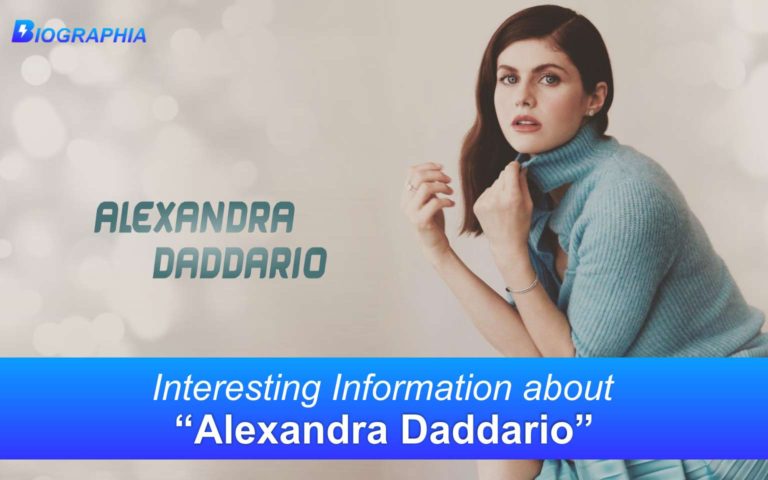 Alexandra Anna Daddario is an American actress. Better known for her role as ‘Annabeth Chase‘ in the ‘Percy Jackson’ film series.

Her first television show was ‘All My Children’. Later on, in 2017, her acting skills were highly praised by the critics in the movie “Baywatch” which also featured Dwayne Johnson, Zac Efron, and Priyanka Chopra in the lead roles.

Her dark blue eyes and gorgeous smile makes her one of the most beautiful women in the world.

Till now, she has acted in more than 28 Hollywood films and has been nominated for many awards.

Hobbies: Shopping, Watching TV and Movies, and Listening to Music

1. She belongs to a well-established family as her mother is a lawyer and her father is a prosecutor.

2. From a young age she decided to become an actor and bagged her first role at the age of 16, in the soap opera titled All My Children.

3. She also acted in several horror films like The Attic with Elisabeth Moss, Jason Lewis, and Tom Malloy in the leads, Texas Chainsaw 3D starring Trey Songz and We Summon the Darkness where she was also the producer.

4. She has also starred in various famous TV shows like White Collar, New Girl, True Detective and The Last Man on Earth.

5. She is too passionate about dogs and also a dog activist where she propagates the idea of adopting dogs rather than purchasing new ones.

6. She belongs to a diverse ethnic lineage consisting of Italian, Czech, English, and Irish.

7. Apart from her scintillating beauty and charming acting skills, she is also known for her meticulous fashion sense and is regarded as one of the most elegant and sophisticated dressed celebrities in Hollywood.

8. In the psychological thriller film ‘Night Hunter’, she worked alongside esteemed actors like Henry Cavill, Ben Kingsley, and Stanley Tucci.

9. Her mesmeric beauty could be witnessed in various music videos like Radioactive by Imagine Dragons, Judy French by White Reaper, and Wait by Maroon 5.

Jason Fuchs – Alexandra was rumoured of dating her co-star Jason Fuchs in the movie ‘Pitch’.

Logan Lerman – Alexandra and Logan met each other at the sets of Percy Jackson, both instantly developed a connection and began dating each other. In 2014, the couple got engaged, however, owing to their busy acting schedules, they were unable to sustain their relationship and had to split up.