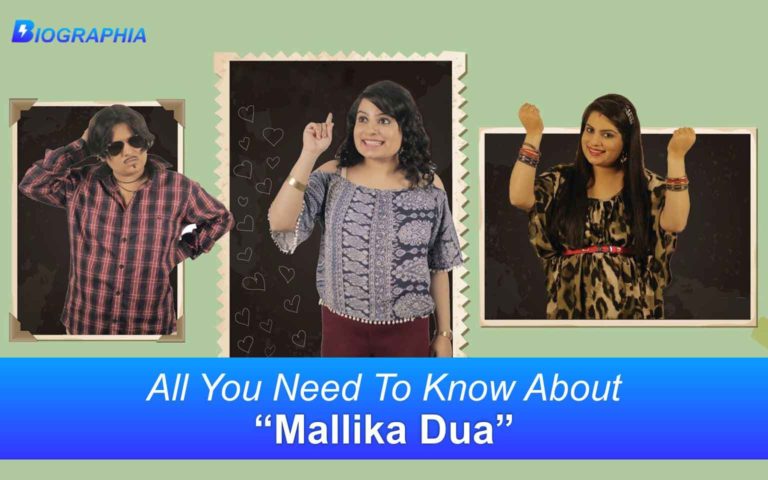 Even if you don’t follow her on Instagram, you definitely would have come across a character called Makeup Didi. Yes, Mallika Dua is our very own funny Makeup Didi known for her on-point comic timing.

She is an Indian actress, comedian, writer, also a former advertising copywriter. She is not only extremely funny but highly intellectual as well.

Along with making this world a funnier place to live, she has a bold personality and stands by what she believes in.

Apart from various TV shows and movies, she also starred in Girliyapa’s, “Why should hot girls have all the fun?”.

The judges have to press a bell if they like the contestants’ comic act in the Great Indian Challenge Show. During the show, Akshay Kumar told Mallika, “Aap bell bajao, main aapko bajata hoon”.

Mallika criticized this behavior on Twitter. Vinod Dua, Mallika’s father took it to a Facebook post later: “I am going to screw this cretin Akshay Kumar for telling his co-worker Mallika Dua that “aap bell bajao main aap ko bajata hun. This is his sense of humor and language. Star Plus. Wake up.”

Mallika and Vinod Dua both deleted their posts later but faced a lot of anger on social Media and Akshay Kumar’s wife, Twinkle Khanna made it worse by making a joke out of it but apologized for the same later on.

Her family background is very strong and she herself is what we call Beauty with Brains. Her father is a renowned journalist. She worked as an advertising copywriter before joining showbiz.

Mallika’s mother was a Doctor and her sister Bakul is Clinical Psychologist.

She studied at Modern School, Barakhamba Road, Delhi, India. She went to Hindu College, Delhi University but discontinued after a year, and then went to Franklin & Marshall College, Lancaster, Pennsylvania to pursue theatre.

She started her advertising career as a trainee at McCain Erickson and then at Contract Advertising.

Her father is a renowned journalist. He worked in Doordarshan and NDTV India.

She was an advertising copywriter before getting famous as a comedian.

She starred opposite Lisa Haydon in the web series The Trip (2016) which also starred Shweta Tripathi and Sapna Pabbi.

Mallika has got the zodiac sign of cancer. She has got some serious traits of her zodiac sign. She values her family a lot, away from bad behavior, has got a pure heart. Isn’t it amazing?