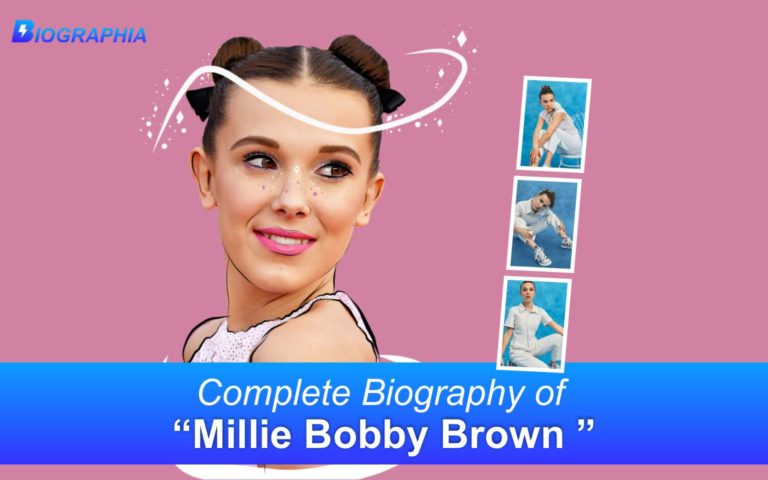 The saying goes like talent has no age and Millie Bobby Brown proves the saying right. From an early age, Brown had a knack for acting and wanted a career out of it. She got her chance at the age of 9 as Young Alice in Once Upon a Time in Wonderland.

Her unique acting style led her to play various guest roles on television. But, her moment to fame came at the age of 13, where she played the role of Eleven in the super hit Netflix web series Stranger Things. She was widely praised and became an overnight sensation around the world for her role.

Brown’s charismatic looks and flawless acting made her featured in films like Godzilla: King of the Monsters, Enola Holmes, and Godzilla vs. Kong.

Brown’s wide reach and massive fan following featured her in the Time 100 list of the world’s most influential people.

Known For: Her role as Eleven in the Sci-fi horror web series Stranger Things

In a live stream, Ecimovic said he “groomed her”, alluding to rumors that he had a relationship with Millie and she was just a minor at that time.

His broadcast came after pictures of both of them embracing and kissing each other were leaked across social media, which led to rumors that the two had dated. Millie’s team told TMZ that they would take necessary action against him.

One of her old videos got viral where she used a homophobic slur, the d-word. She was asked to name a romantic couple nickname for Stranger Things characters Dustin and Mike in the video. She combined Dustin with Mike and inadvertently said the word which is a homophobic slur against lesbians.

All of this led to Millie quitting social media back in 2018. The hashtag #TakeDownMillieBobbyBrown was used by many people sharing fake stories that painted Millie as a homophobic extremist.

Brown was born in Marbella, Andalusia, Spain. Her family moved to Bournemouth, Dorset, when she was four years old, and then to Orlando, Florida, four years later.

The Thing about Jellyfish (upcoming film)

Favorite TV Show: Keeping up with the Kardashians

She is currently romantically involved with Jacob Bongiovi (Rumored)

Millie stated that her biggest fears are sharks, darkness, and bungalows on The Late Show with Stephen Colbert (2015)

She was born with partial hearing loss in one of the ears.

She says that her mother selects all of her outfits so that she is dressed appropriately for her age.

She also auditioned for Game of Thrones (2011).