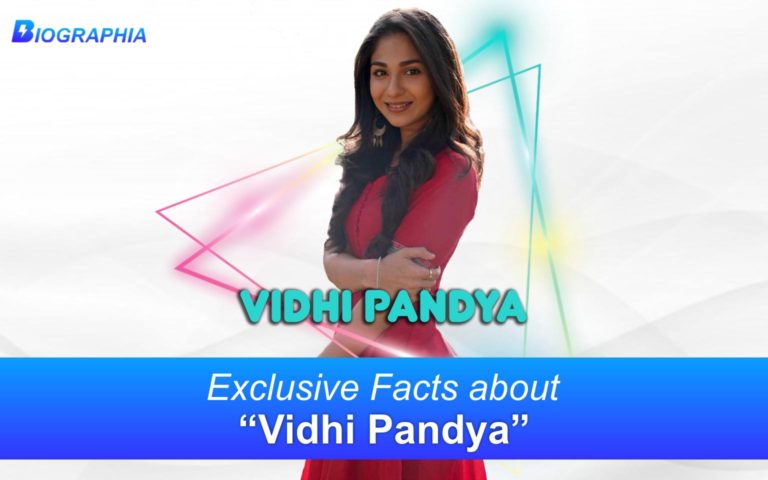 Vidhi Pandya in a short period has become a household name for his portrayal of ‘Imli Rajvanshi’ in the hit TV serial Udaan. Her intense and assertive acting style has consolidated her as the mainstream Indian TV actress.

She will be seen in the upcoming season of Bigg Boss 15 alongside Donal Bisht, Shamita Shetty, Karan Kundra, and Akasa Singh.

Known For: Played the role of ‘Imli Rajvan’ in the popular TV serial Udaan.

Favourite Movie: Holiday: A Soldier Is Never Off Duty, and Main Tera Hero

1. She marked her debut with the TV serial Tum Aise Hi Rehna where she played a supporting role as ‘Kiran Maheshwari’ alongside Kinshuk Mahajan, Shefali Sharma and Madhura Naik in the leads.

2. She has also starred in the hit TV serial Balika Vadhu where she portrayed the character of ‘Nidhi’ alongside Toral Rasputra, Shakti Anand and late Sidharth Shukla in the main leads.

3. Her performance in Colors TV serial Udaan as ‘Imli Rajvanshi’ was highly praised by the audience and soon raised her to instant fame and glory.

4. After her hit TV show Udaan got wrapped up, she was unable to find any work for 1 and a half years, in that period, she had to face rejections and also suffered from anxiety attacks.

5. She had been given a trial shot as ‘Suman Tiwari’ for the TV serial Ek Duje Ke Vaaste 2 before it went on air, but the makers didn’t consider that part. However, recently she replaced Kanikka Kapur in the serial and now is the main female lead.

6. She is yet to find her soulmate and believes in a committed relationship and marriage. In an interview, she mentioned that, for now, she is single and if anyone fits her criteria can message on her Instagram profile.

7. She has a huge crush on Bollywood superstar Shah Rukh Khan, they met on the sets of Udaan, where the actor came with Anushka Sharma to promote his film Jab Harry Met Sejal.

8. She is best friends with the fellow actor Helly Shah. She further revealed that her bond with Helly, can’t be expressed in words; it’s too deep and emotional.

9. It will be a new experience for the actress in the upcoming season of Bigg Boss 15, as she has never been on any reality TV show before. She will be seen along with other contestants like Umar Riaz, Nishant Bhat, Vishal Kotian, Sahil Shroff, and Miesha Iyer.