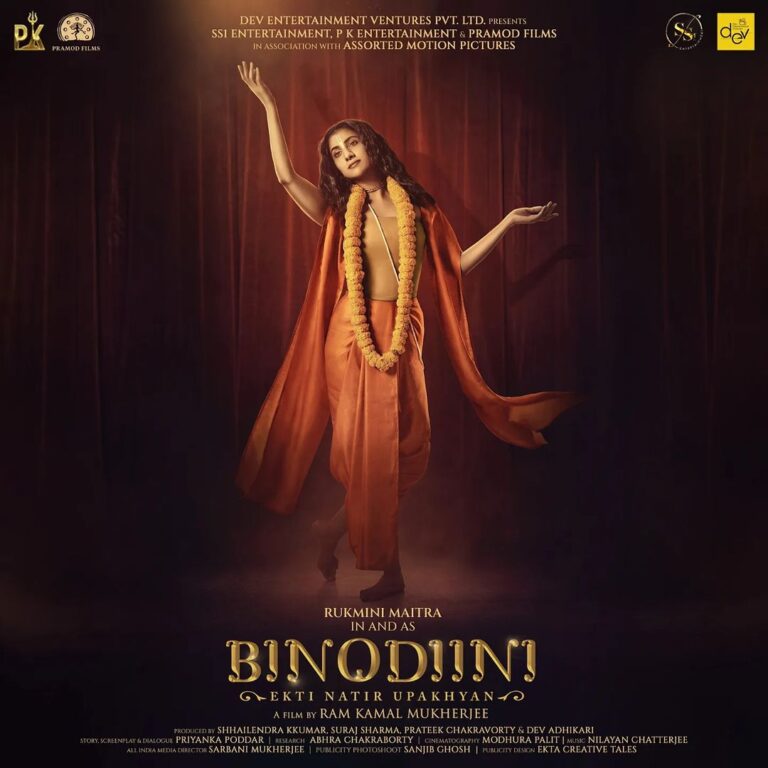 Want to know about Rukmini Maitra’s new movie and in what new role she will be seen?

Rukmini Maitra is known for his 2021 Bollywood action-thriller ‘Sanak’ in which she starred alongside Vidyut Jammwal and earned tremendous praises for her role.

Rukmini Maitra will play the lead role of Binodini Dasi a.k.a Notee Binodini/Nati Binodini in this biopic.

Maitra is one of the renowned faces of Bengali cinema known to feature in various movies like Chaamp, Cockpit, Kabir, Kidnap, and so on.

Rukmini’s role as Binodini can be a career-defining moment for her concerning the challenges it involves as she will be playing the role of one of the finest Bengali theatre artists the world has ever seen, Binodini.

Who was Bonodini in Real Life?

Binodini Das was born in 1863 in the pre-Independence era and was recognized for her innate talent for drama and theatre.

Binodini had a rough start in her life as she was introduced to the world of prostitution.

Also called Notee Binodini she began her acting journey at the tender age of 12.

Her career as a thespian as early as it began couldn’t continue for long owing to her sudden retirement at the age of 23.

In her acting career span of 12 years, she played a plethora of roles comprising Sita, Draupadi, Ayesha, Kaikeyi, Pramila, and so on.

Later on in her life, she re-emerged as an ardent supporter of Bengali Theater and provided astounding contributions to the field by introducing new techniques for stage creation.

What to Expect from Rukmini Maitra’s role as Binodini

In the recent release of Binodiini’s teaser, Rukmini Maitra can be spotted in the iconic character of Chri Chaitanya Mahaprabhu, quite often played by Dasi in her stage-acting days.

Rukmini Maitra took on her Instagram to pay homage to such a legendary being and theatre actor by sharing the ‘Binodiini – Ekti Natir Upakhyan’ teaser.

Maitra in her Instagram post also wrote that to her this is not just cinema but a tribute to the “Queen of Indian Stage” who carved the way for future generations of artists.

Sanak actress further said that it was a story untold, a woman’s journey amidst patriarchy to unfold.

Maitra by concluding her post asked for everyone’s wishes, blessings, love, and support.

Sources state that Maitra had undergone rigorous 2 years of training for the role of Binodini.

Which consisted of various forms of training like Indian Classical Dance.

Rukmini Maitra also resorted to conventional forms like books to have a much stronger grip concerning the character and the way Indian society behaved in the 19th century.

Rukmini Maitra’s upcoming biographical drama ‘Binodiini – Ekti Natir Upakhyan’ is directed by Ram Kamal Mukherjee who is regarded as one of the most prominent Indian short filmmakers by the Times of India.

Various critics believe that Ram Kamal Mukherjee’s Binodiini will soon become the crown jewel of all his directorial works.

The movie further consists of an amazing film crew as it’s written by Priyanka Poddar, the cinematographer Modhura Palit who has also worked in Bengali film ‘Kishmish’ which starred Dev and Rukmini Maitra.

So, it would be the second time for the duo of Rukmini and Modhura. Exciting, isn’t it?

It would be not the first time any actor has tried to play the role of the famous Bondini Dasi.

So, we believe Rukmini Maitra’s new movie ‘Binodiini – Ekti Natir Upakhyan’ will turn out to be the actress’s if not the finest, one of the finest performances.

The effort and time involved in making such a high-quality Bengali film ensure that it would be doing justice to such a prominent figure in Indian theater.

So, are you excited to witness sizzling diva Rukmini Maitra in a completely new avatar in her upcoming movie?