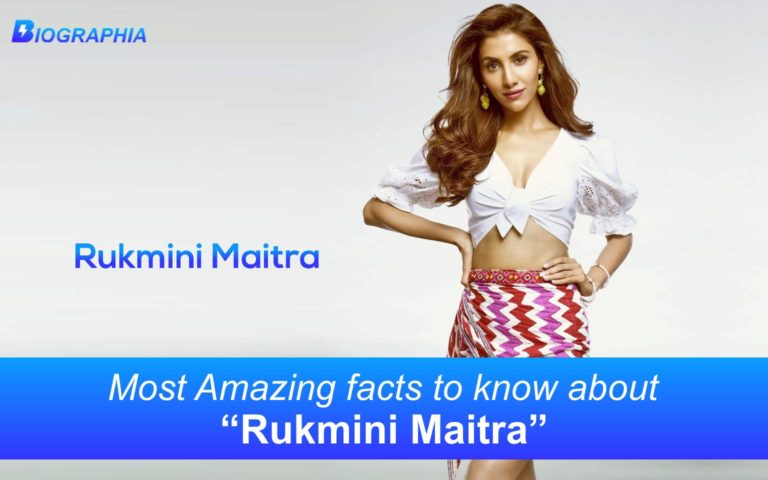 Sparkling eyes, pleasant face and astonishing figure make Rukmini Maitra one of a kind and an alluring model. Maitra with her amorous appeal can make anyone fall for her hypnotic beauty and make them helpless in front of her.

Maitra’s road to glory began with her illustrious modelling career where she endorsed a plethora of leading brands like Reliance, Lakme, Titan, Harper’s Bazaar, Royal Stag, and Rado.

Maitra began her acting career with Bengali language movies like Chaamp, Cockpit, Kabir, Kidnap, and Password and in all these movies her co-actor was prolific Bengali stalwart Dev.

Her looks and talents were appreciated by The Times of India, as they placed her at 23rd position in The Times list of 50 Most Desirable Women of 2017, other popular names featured on the list were Manushi Chhillar, Jacqueline Fernandez, Katrina Kaif, Shraddha Kapoor, and Diana Penty.

Rukmini in 2021, acted in her debut Bollywood movie titled Sanak alongside Vidyut Jammwal and Neha Dhupia in the main roles.

Known For: Played the role of ‘Anshika’ in the action movie Sanak and in 2017 was placed at 23rd position in the Times list of 50 Most Desirable Women, alongside other gorgeous celebrities like Disha Patani, Alia Bhatt, Kangana Ranaut, Rashmika Mandanna, and Kiara Advani

1. Maitra at the age of 13, started to pursue her career in modelling and featured in various advertisements for popular brands.

2. In 2017, she got her first chance as a female lead in the Bengali film Chaamp along with Bengali actor Dev.

3. Maitra has done all her Bengali movies alongside Dev as her co-star, and soon started dating each other. To portray her love for Dev, she has got a tattoo of Dev’s name, on her left wrist.

4. Owing to her fabulous personality and riveting beauty, she got the privilege to model for some of the leading fashion designers of the country like Anita Dongre, Suneet Varma, Dev R. Nil, and Masaba Gupta.

5. She was also offered the lead female role of ‘Taani Surinder Sahni’ in the Shah Rukh Khan starrer Rab Ne Bana Di Jodi, but declined the offer, because, at that time, education was the priority for her. The role was then portrayed by Anushka Sharma

6. While shooting in Mumbai, for her debut Bollywood movie Sanak alongside Vidyut Jammwal, she suffered from COVID-19 and mentioned in an interview that it was the toughest and most depressing time she had dealt with in her whole life.

1. Dev – Rukmini Maitra and Dev, have known each other for a long time and began dating on the sets of Chaamp in 2017.