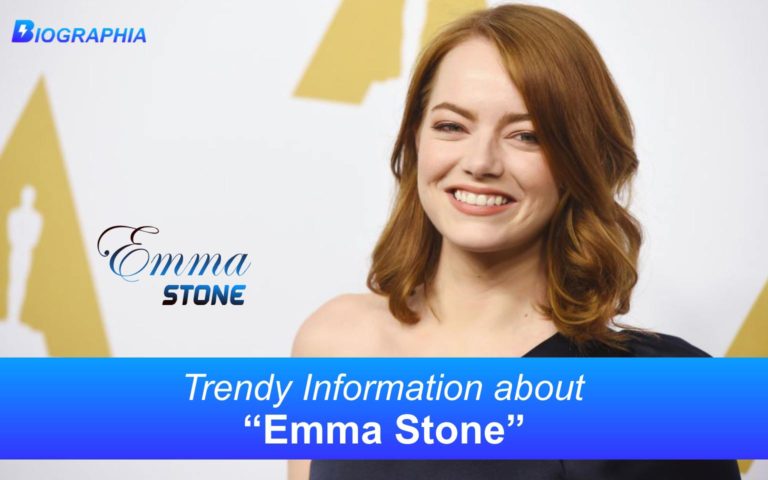 Emma Stone, the supremely talented American actress is the living embodiment of sublimity in Hollywood. Stone’s effervescent and riveting personality with the flawless method of acting has made her one of the highest-paid actresses in the World.

Stone rose to prominence with her role as Mia Dolan in the Academy Award-Winning Film, ‘La La Land’ alongside Ryan Gosling. Her performance displayed the perfect blend of romantic versatility and fascinating beauty and established her at the pedestal of ‘One of the Greatest Hollywood Stars’.

Stone’s performances were also appreciated in various movies like Ghosts of Girlfriends Past, Zombieland, The Amazing Spider-Man, and Irrational Man.

Her scintillating looks and enthralling beauty also made her featured in the music video titled ‘Anna’ by Win Butler.

Known For: Played the role of ‘Mia Dolan’ in the hit movie La La Land and Gwen Stacy in the superhero action movie The Amazing Spider-Man

Favourite Foods: Beets and anything with mayonnaise, French Fries, Brussels Sprouts, and Sushi

Favourite Perfumes: A La Nuit by Serge Lutens and Gardenia by Chane

1. According to a news source, after the release of Emma Stone’s film Aloha starring Bradley Cooper and Rachel McAdams in the leads. Emma was encircled with harsh critics and various mean comments because of the role of Allison Ng, which she portrayed in the movie, as everyone expected an Asian origin actress to play the role rather than a white actress.

Everyone at their social media handles started commenting about the whitewashing of Aloha’s cast leading the filmmakers to issue an apology on the behalf of Emma Stone.

2. At the age of 6, she had the knack for acting and performed at the school’s musical titled No Turkey for Perky on the occasion of  Thanksgiving. Further, at the age of 11, to work on her acting skills, she joined the community theatre of acting.

3. Before becoming a successful actress, her first job was at a dog bakery known as Baking Dog Treats.

4. Very few people know that Stone was a gymnast as a kid and once injured both her arms in the practice.

5. She is a tenacious and diligent performer and has played the tambourine on stage with a bleeding foot.

6. Emma’s favourite song is the Beatles, ‘Blackbird’ and to show her love for the song, she etched a tattoo of bird feet on her wrist.

7. She is a natural blonde, but in an interview, she mentioned that she preferred red hair more than any other colour of her hair.

8. Emma’s critically acclaimed and award-winning film La La Land alongside Ryan Gosling was not her first film with the fellow co-star, her other films with Ryan Gosling is Gangster Squad and Crazy, Stupid, Love.

1. Andrew Garfield – Emma Stone and Andrew Garfield first met with each other on the sets of The Amazing Spider-Man and, an instant love bond was developed between the stars. Though, both the actors immensely tried hard to have a covert relationship.

Unfortunately, Emma and Andrew, can’t prolong their love and dating period and had a break-up in 2015.