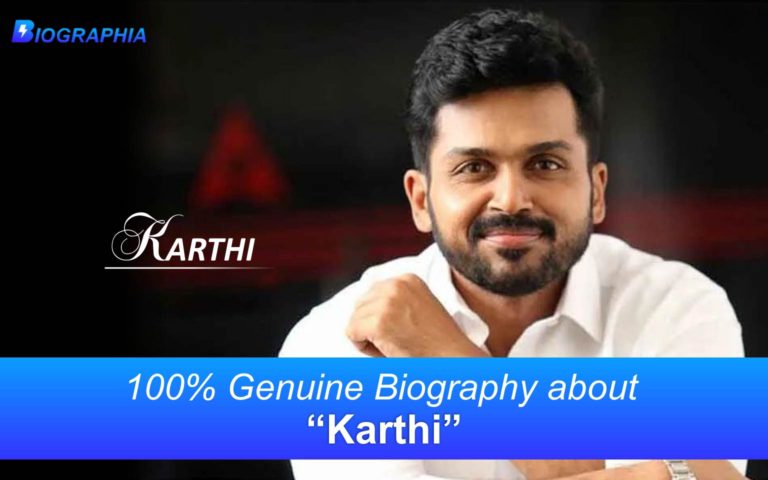 Karthi is a critically acclaimed actor and a Tamil stalwart known for his effortless and flawless style of acting. His performances carry immense dedication and a lot of hard work.

He began his career as an Assistant Director under Mani Ratnam. Soon featured in the film Paruthiveeran, which was a huge success and his performance was highly applauded for its high level of quality. For his role, he even won the Filmfare Award for Best Actor in Tamil.

Karthi comes from the lineage of superstars, as he is the son of veteran actor Sivakumar and the younger brother of famous actor Suriya. He will soon feature in P.S. Mithran’s Sardar.

Net Worth of Karthi: $3 Million

1. Karthi’s film Kaithi surrounded itself with controversy when a person named Rajeev filed a complaint stating he was the one behind the script of Kaithi. Moreover, he has demanded Rs. 4 Crore as compensation and license for the story from the producers.

2. Over a selfie, the situation grew tense between Karthi and actress Kasturi Shankar. When, both the actors met each other on a stage for the promotion of the audio launch of July Kaatril.

Kasturi while taking a selfie with Karthi, took a dig at Karthi’s father Sivakumar, that he isn’t there with them, pointing out to the older controversy of his father. Karthi quickly replied that the act of taking a selfie has become disrespectful in recent times.

1. Karthi did not want to become an actor first. He always mentioned that it was the circumstances that brought out the actor in him.

2. Karthi and superstar Mahesh Babu, both have studied from the same college.

3. During his school days, he didn’t like watching films of Kamal Haasan and Mani Ratnam.

4. Karthi had established a negative image among the audience by doing the same kind of movies like Paruththi Veeran and Yuganiki Okkadu. Slowly he changed his image, by performing different kinds of roles.

5. Apart from his on-screen work, he has been an active welfare activist, helping out the needy and inspiring his fans to try to do the same.

6. His father Sivakumar is a great Tamil actor.

7. He married Ranjini Chinnaswamy in 2011. Together they have a daughter named Umayaal who was born in 2013.

8. He has adopted a White Lion cub named Namratha.

9. Before he became an actor, he used to work as a graphic designer in New York.

10. Karthi’s movie Sulthan starring Rashmika Mandanna was given 4 out of 5 stars by The Indian Express and was praised for its strong casts and emotional sequences.