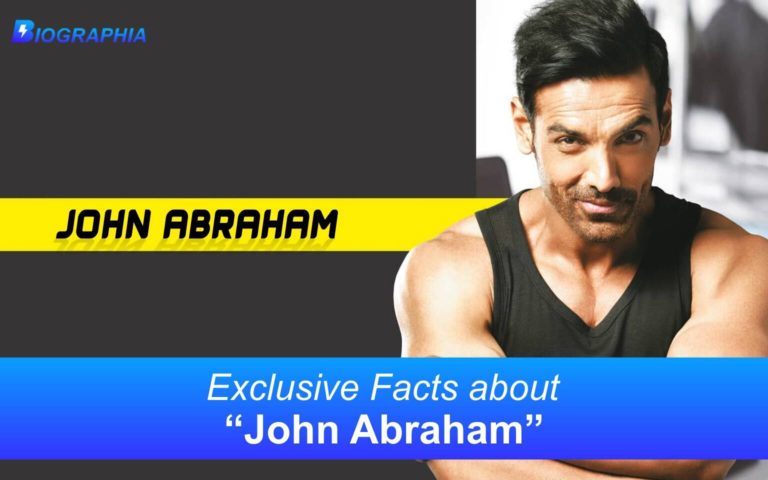 Only a handful of people would be unaware of the villainous role of ‘Kabir’ in the blockbuster movie Dhoom, which was played by the very handsome, dashing and muscular John Abraham.

The commercial success of the movie Dhoom, introduced John into the mainstream Hindi cinema, who along with his dazzling looks and fluid acting style consolidated himself as one of the most versatile actors of Bollywood.

For his numerous other performances in movies like Shootout at Wadala alongside Anil Kapoor and Kangana Ranaut in the leads, Force with Vidyut Jammwal, and critically acclaimed movie Madras Cafe alongside Nargis Fakhri and Raashi Khanna, for which he received several nominations for various prestigious cinematic awards.

Known For: Played the role of ‘Kabir’ in the super-duper hit movie Dhoom and the role of ‘Veerendra “Veer” Rathod’ in the action-thriller movie Satyameva Jayate

1. John was called as a special guest on the reality Tv show  Sa Re Ga Ma Pa Singing Superstar, after Sugandha Mishra’s, performance, he got so impressed, he kissed her on stage, which angered Sugandha’s family and forced John to publicly apologize to her on the social media.

2. John Abraham on the trailer launch of his movie ‘Force 2’ starring Sonakshi Sinha and Tahir Raj Bhasin in the main roles. One of his fans was found misbehaving with him in the hope to take a selfie, the fan’s act angered John to such an extent that he slapped him to maintain his distance.

However, the news was spread like wildfire in the media and everyone criticized John for his violent act and commented that the status of a celebrity didn’t give him the right to attack people.

Finally, the matter was resolved by the court where it allowed KriArj to be the co-producer of the film and demanded them to pay additional Rs. 10 crores for the movie’s printing and advertising.

1. John has an interesting family background and comes from mixed religious identities, as his father is a Syrian Christian and his mother is a  Zoroastrian Irani.

2. Since his childhood he was very much into sports and enjoyed participating in athletic races.

3. John’s modelling career began with Jazzy B’s music video, and he went on to participate in Gladrags Manhunt Contest and the Philippines for Manhunt International.

4. After a successful run as a model, John joined the Kishore Namit Kapoor Acting Institute, to improve and master his acting skills, so that he can establish himself as a mainstream Bollywood actor.

5. John has also produced the Marathi movie Savita Damodar Paranjpe, which was very well-received by the critics and its cast consisting of Subodh Bhave, Trupti Toradmal, and Raqesh Bapat received huge appreciation from the fans for their performances.

7. His skill-set is not only limited to acting and modelling, as he is great tech-savvy and has conceptualized a mobile-based game known as ‘Velocity’.

8. His muscular and chiselled body has made him the perfect fit for action movies, but time and time again John with his witty humour and flawless comic timings in movies like Garam Masala, Dostana, Desi Boyz, Housefull 2, and Pagalpanti, proved his worth as a dynamic actor of the industry.

9. John is also famous for his social activism, especially for animal protection as he supports organizations like PETA and  Habitat for Humanity.

10. John in 2021, announced the release of his movie Satyameva Jayate 2, which is the spiritual sequel of Satyameva Jayate, the movie will mark the debut of Divya Khosla Kumar as the female lead in the movie.

11. He will also be seen alongside Disha Patani, Arjun Kapoor, and Tara Sutaria in Mohit Suri’s Ek Villain Returns and Lakshya Raj Anand’s action-thriller Attack alongside Jacqueline Fernandez and Rakul Preet Singh in the main roles.

Destined to be with one another, however, the couple owing to personal reasons split up in 2011. Furthermore, John went on to marry Priya Runchal in 2014 and Bipasha married Karan Singh Grover in 2016.

Check Out: John Abraham’s Ek Villain Returns fellow star Tara Sutaria’s Sizzling and Exciting Photo Collection, which have been accumulated after countless hours of scrupulous surfing to provide a mesmeric experience for your eyes.