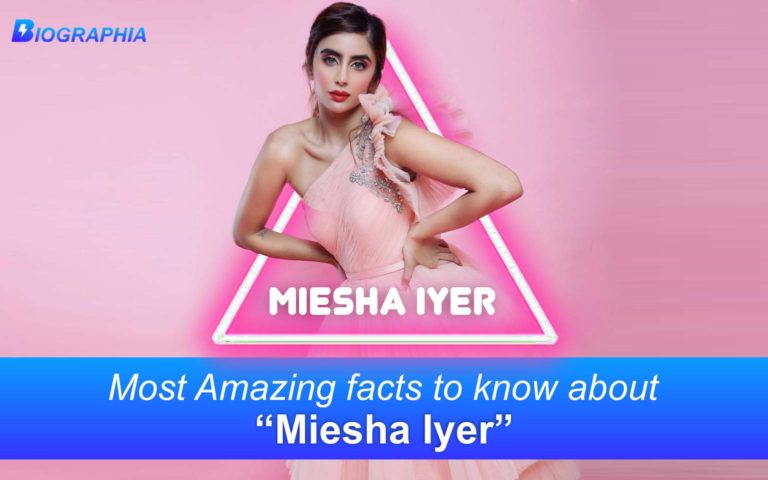 Miesha Iyer with her enthralling beauty and sizzling hot looks has made her the coming of the age, talent to watch out for. Her claim to fame moment was her appearance in the MTV Splitsvilla Season 12 which made her an overnight sensation across the country.

She has also featured in the first season of Ace of Space hosted by Vikas Gupta, where she was one of the finalists alongside Varun Sood and the winner of the show Divya Agarwal.

Her competitive and stunning side will once again be seen in the prominent reality TV show Bigg Boss 15 alongside Karan Kundrra, Shamita Shetty, and Donal Bisht.

Known For: Participating in the TV reality show ‘MTV Splitsvilla 12’ hosted by Sunny Leone and Rannvijay Singha and Finalist of ‘Ace of Space Season 1’

Net Worth of Miesha Iyer: $1 Million

1. Miesha Iyer and Bhavya Singh gathered instant media buzz, when news broke out that once besties on the sets of MTV Splitsvilla have recently, turned hostile against each other. While, Miesha remained silent on the whole incident despite the huge trolling from her fans.

However, Bhavya commented through her Instagram post that both have moved ahead in their life and expects people to move on as well.

1. Miesha after her graduation soon decided to try her luck in modelling and acting, as she always took pride in her looks and personality.

2. She has endorsed online for various brands through her Instagram accounts consisting of, Skinnsi, The Beauty Co, Cashkaro, My Fitness and Livon

3. She began her career on MTV’s reality show named Ace of Space hosted by Vikas Gupta. She surprised everyone with her appealing looks and bold personality. She survived for 71 days alongside Divya Agarwal, Pratik Sehajpal, and Varun Sood.

4. After her phenomenal performance in Ace of Space, in the next year she appeared on MTV Splitsvilla Season 12, along with her match Ashish Bhatia they reached the show’s finale but were defeated by the pair of Shrey Mittal and Priyamvada Kant.

5. Her relationship with the Splitsvilla contestant Ashish Bhatia was quite on the buzz, as their chemistry on the show had no bounds and everyone believed that they were dating.

6. She will be seen in the upcoming season of Bigg Boss, alongside her Ace of Space Season 1 runner-up Pratik Sehajpal who was rumoured of dating her in the past. Miesha’s fans expect her to utilize past reality shows experience which will help her to survive better on the show.

Miesha met Pratik on the sets of MTV Ace of Space, on the show they used to fight a lot and it seemed that in real life they could never be friends. However, after the completion of the show, their issues got resolved and both developed a deep bond and were also seen together on various social media platforms. It was assumed by their fans that both might be in a committed relationship.

Miesha and Ashish were the finalists of MTV Splitsvilla 12, throughout their journey they remained close to each other and shared a bond greater than friendship. However, neither of them confirmed their relationship status but still are assumed to be seeing each other.

For more gorgeous and scintillating pictures of Miesha Iyer, do visit our ultimate photo collection which you may not have ever seen before.