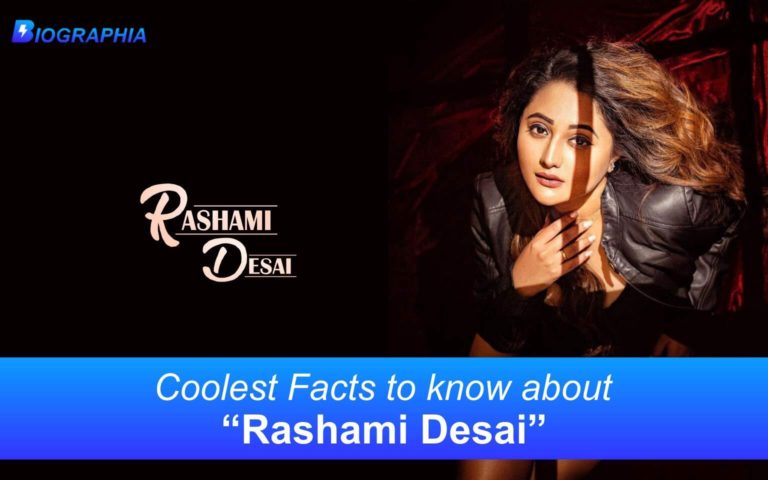 Sometimes it’s not adequate enough to rely on words to express an eminent personality’s prowess, one such personality is Rashami Desai, who with her breathtaking performances and peculiar portrayal of characters has formed a unique style that makes her one of the most Talented and Decorated Tv actresses of India.

Rashami’s journey of opulence began with her remarkable performances as ‘Mandodari’ in the mythological drama Tv series Raavan, ‘Tapasya Thakur’ in the Tv drama Uttaran, and ‘Shorvori Parth Bhanushali’ in the romantic Tv serial Dil Se Dil Tak alongside Sidharth Shukla and Jasmin Bhasin in the important roles.

Desai’s illustrious career is not only limited to her iconic performances in television, she has also worked as a supporting actress in numerous movies like Yeh Lamhe Judaai Ke starring Shah Rukh Khan and Raveena Tandon in the lead roles, Shabnam Mausi featuring Ashutosh Rana and Vijay Raaz in the leads, and a Gujarati language movie titled Superstar.

Rashami also participated as a challenger alongside Devoleena Bhattacharjee in the house of Bigg Boss 15. The house already consists of well-known celebrities of Indian television like Jay Bhanushali, Vishal Kotian, Karan Kundra, and Shamita Shetty.

Known For: Played the role of ‘Tapasya Thakur’ in one of the longest running Indian soap opera Uttaran. She was the third-runner up of the controversial reality Tv show Bigg Boss 13

1. Rashami Desai, while a contestant on Bigg Boss 13, developed a romantic bond with fellow contestant Arhaan Khan, and everyone on the outside assumed that the couple would soon announce the news of their engagement.

But, there was a shocking revelation by the host of the show Salman Khan, who mentioned that Arhaan was married and has a child from his previous marriage, which led to an emotional breakdown for Rashami and she instantly ended all her emotional ties with Arhaan.

2. After the end of Bigg Boss 13, which was won by Siddharth Shukla. The fans of Rashami Desai asked her to post a throwback picture of her with Siddharth Shukla. When she posted a picture, everyone started a huge wave of trolls against Rashami stating she is doing all this to increase her followers and amass attention on social media platforms.

Thus, Rashami after getting fed up with the trolls gave the perfect reply and said that the picture was on the request of her fans and doesn’t need to stoop so low, to garner attention.

3. Rashami Desai and Siddharth Shukla’s news of scuffle, rifts, and animosity is neither new nor hidden from their fans. It all began on the sets of Dil Se Dil Tak, where the on-screen chemistry of the couple was fabulous but their relationship in real life was extremely hostile.

As, Siddharth wanted Rashami’s role to be sacked and even, purposely gave her character’s line to fellow co-star Jasmin Bhasin. However, the makers of the show still considered Desai as their top priority, leading to the packing-up of Siddharth Shukla from the show.

4. Rashami Desai in an interview revealed that her reason for giving divorce to her then-husband Nandish Sandhu was their unkind and vicious relationship, as Nandish was pernicious towards her and disrespected her.

However, Nandish’s PR team in reply to Rashami’s allegations mentioned that Nandish was the victim in the whole scenario rather than the culprit.

1. Desai before establishing herself as the leading Tv actress, has prolifically worked in the Bhojpuri movies like Tulsi, Balma Bada Nadaan, and Kab Hoi Gauna Hammar which received the National Award for Best Feature Film in Bhojpuri.

2. Her real name is Shivani Desai. She was asked by the makers of the Indian Tv show Pari Hoon Main to change her name, she accepted their request and chose ‘Rashami’ as her on-screen name for numerological reasons.

5. Barring her acting roles, she is a phenomenal model of unparalleled beauty and has ramp walked in some of the eminent fashion shows like Caring with Style and Terry Fox Foundation, and most importantly the funds raised through these fashion shows were all donated for social causes.

7. Desai has a remarkable reach and massive fan following, as BizAsia in 2020, placed her at 22nd position in the List of Top 30 TV Personalities.

8. Rashami in 2019, revealed her pressing health issues, as she was suffering from a harmful skin disease known as ‘Psoriasis’, due to the disease her weight had also increased.

9. Desai’s plethora of work and brand value has marked her as one of the highest-paid television actresses of India.

10. It would be a second time when Rashami Desai would be entering the house of Bigg Boss 15 as a contestant, earlier she was seen in the 13th season of Bigg Boss, where she was the 3rd runner-up. The contestants who are already surviving in the house for almost 8 weeks include Tejasswi Prakash, Neha Bhasin, Umar Riaz, Pratik Sehajpal, and Nishant Bhat.

1. Nandish Sandhu – Rashami Desai and Nandish Sandhu relationship began on the sets of Uttaran, and soon tied the knot in 2012. However, their married life couldn’t sustain for a longer period and finally, they got separated in 2015.

2. Sidharth Shukla – Rashami Desai and Sidharth Shukla came close on the sets of Dil Se Dil Tak and everyone created the rumour that the on-screen couple is also dating in their real life. Though, they seemed intimate but never confirmed the status of their relationship.
Soon, news regarding their rift was out in the media, and the couple went on their separate ways from thereon.

3. Arhaan Khan – Rashami Desai and Arhaan Khan were seen together in the controversial reality Tv show Bigg Boss 13, where they developed a genuinely romantic relationship. However, their relationship took a drastic turn when Salman Khan revealed the truth about Arhaan past marriage and his children which shocked Rashami and eventually led to their break-up.

4. Laksh Lalwani – Rashami Desai and Laksh Lalwani were also rumoured to be dating each other since their stint in Adhuri Kahani Hamari. They never revealed the truth about their private life, but their social media account was flooded with each other’s adoring photos which portrayed a completely different story regarding their loved life.

Also Read: Rashami Desai’s Dil Se Dil Tak co-star and apparent boyfriend Sidharth Shukla’s astonishing facts and shocking controversies, all compiled in the Sidharth Shukla Biography. We promise you, the information mentioned will certainly, take you on an enthralling journey of surprises and amusements.