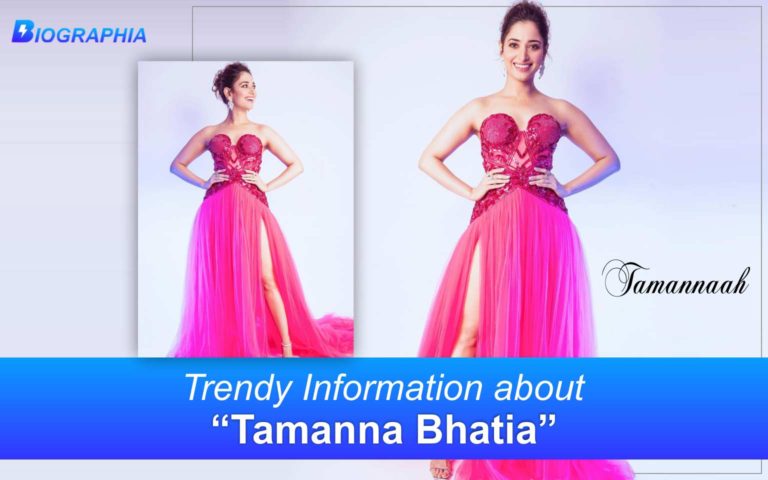 Tamanna’s charming personality and majestic demeanour make her the standout actress in the industry. She is known for her spectrum of emotions portrayed through her performances making everyone feel exuberant and thrilled.

She began her career with the Hindi language film Chand Sa Roshan Chehra which was a disaster at the box office but her performance showed her calibre and bright future in the industry.

She rose to fame with her Telugu and Tamil languages films like Happy Days and Kalloori where her acting was remarkable and highly appreciated by the critics.

Her other notable Telugu and Tamil films are Konchem Ishtam Konchem Kashtam with Siddharth, Kanden Kadhalai with Bharath, Paiyaa with Karthi, and Sketch with Vikram. She was nominated for numerous accolades for her outstanding performances in these movies.

She marked her return in Bollywood with Sajid Khan’s Himmatwala starring opposite Ajay Devgn, it was not a commercial success but her other Hindi film Entertainment starring Akshay Kumar highlighted her superb comic timing and was a huge hit at the box office.

She is also known for her stylish swag and sophisticated fashion attire, which has popularized her as one of the most stylish fashionista of India.

The breakthrough in her career came with her role as ‘Avanthika’ in the mega-blockbuster movie series ‘Baahubali’ along with Prabhas, Rana Daggubati, and Anushka Shetty.

Known For: Played the role of ‘Avanthika’ in the blockbuster movie series Baahubali starring Prabhas, Rana Daggubati, and Anushka Shetty in the leads.

1. Famous South director Suraj, commented on Tamanna Bhatia that Indian audiences love seeing actresses in short and revealing clothes rather than in saree or salwar suits.

The comment didn’t go well with Tamanna and she demanded an instant apology for such a misogynistic comment by the director as he had tainted the image of all the actresses in the industry.

2. At an event organized in Hyderabad, an ardent engineering fan of Tamanna threw a shoe at her as he was not happy of the actresses film choices.

She was shocked and quite disheartened by such a hostile treatment by her fan.

3. Tamanna’s debut movie Chand Sa Roshan Chehra’s producer Salim Akhtar filed a case against her, with the Association of Motion Picture and TV Programme Producers and Calcutta High Court for cheating and breach of contract.

Tamanna was supposed to pay the producer 25% of her earnings for five years but the actress failed to do so, after which the producer had to take such a dire step. However, the issue has now been resolved and both parties have compromised for the amount of 25 lakhs.

1. From a young age she had a knack for acting, as she used to perform in her school’s drama plays and was offered her first role at the age of 13.

2. On the advice of a numerologist she changed the spelling of her name from Tamanna to ‘Tamannaah’. As it would bring recognition, fame and success in her life.

3. She is an entrepreneur by nature and has started her jewellery line by the name of Wite-n-Gold.

4. While she was preparing for her board examination she received the offer to star in her first Telugu film named ‘Sri’, initially hesitant but finally approved to feature in the film.

5. Once she understood the reach of Telugu and Tamil cinema, she made her diligent efforts to learn both the languages and gave some amazing performances in the movies like Padikkadavan, Thillalangadi, and Badrinath.

6. Her movie Kanden Kadhalai is a remake of the superhit Hindi film Jab We Met starring Shahid Kapoor and Kareena Kapoor in the lead roles. For her flawless performance, she received the Filmfare Awards South nomination in the category of Best Actress – Tamil.

7. Her appearance in various commercially successful films of the South compartmentalized her as a showbiz actress by the audience and critics, but her performance in different genres and negative roles like in the movie Oosaravelli, completely changed the perception of the audience and consolidated her as the versatile actress of the South industry.

9. Owing to her magnificent looks, she is the brand ambassador of popular brands like Fanta, Khazana Jewellery and Celkon Mobiles along with Virat Kohli.

10. She is also a social activist and was made the face of the government’s social campaign named Beti Bachao, Beti Padhao.

11. She also graced the OTT platform with her performance in web series such as November Story and 11th Hour.

12. She was also part of the second highest-grossing Indian film of all time named Baahubali 2: The Conclusion which also featured known stars like Prabhas, Rana Daggubati, Anushka Shetty, and Ramya Krishnan.

13. Her upcoming Hindi language films are Plan A Plan B with Riteish Deshmukh and Bole Chudiyan with Nawazuddin Siddiqui.

14. Her upcoming Telugu films are F3: Fun and Frustration, Gurthunda Seethakalam, and That is Mahalakshmi.

15. Currently, she is facing severe mental and health issues due to her busy schedule. To reduce the stress, she has developed a workout routine and has stopped eating oily foods.

Baahubali: The Beginning (2015) – Telugu and Tamil

Read More: For more gorgeous and scintillating pictures of Tamanna Bhatia, do visit our ultimate photo collection which you may not have ever seen before