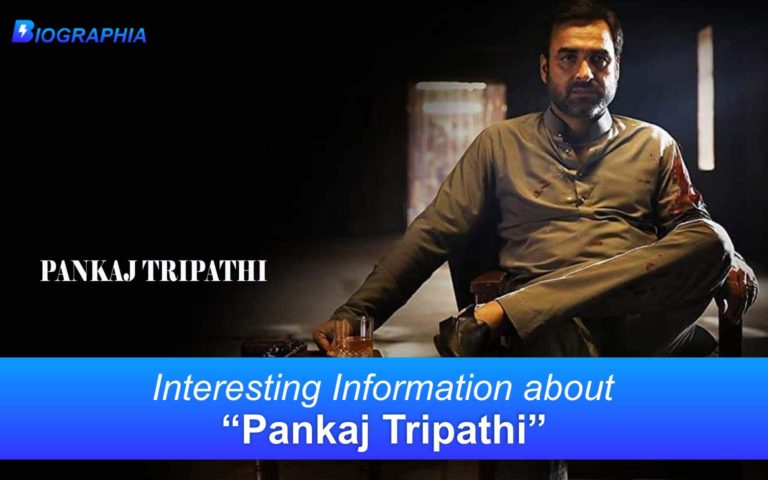 Pankaj Tripathi’s breathtaking performances and superb dialogue deliveries have made him the ‘King of the Digital Space’. His ability to deliver challenging performances in a simplified manner makes him a talent worth watching.

Tripathi shook Bollywood with his electrifying performance in a negative role as ‘Sultan Qureshi’ in the Hindi cult movie Gangs of Wasseypur starring Manoj Bajpayee, Richa Chadda, Nawazuddin Siddiqui and Reema Sen in the lead roles.

His other notable performance was in the super hit web series ‘Mirzapur’, where his calm and fierce acting as ‘Kaleen Bhaiya’ made the audience go crazy. Besides, the series was declared a ‘must-watch web series of 2018′. It also starred Divyenndu, Ali Fazal, Rasika Dugal, Vikrant Massey and Isha Talwar in the leads.

1. Pankaj from a young age was involved in farming. He continued helping his father in the same till the 11th standard.

2. His first interaction with acting was in a village drama. Soon he developed a strong passion and wanted to become an actor after that.

3. In his college days, Pankaj was actively involved in politics. He was a member of Akhil Bharatiya Vidyarthi Parishad and even went to jail while protesting against the state government.

4. In his initial struggling days, he used to work as a kitchen supervisor in Maurya Hotel, Patna.

5. He graduated from the prestigious National School of Drama in 2004. But, initially was rejected twice by the same institution.

6. Everyone remembers Pankaj Tripathi’s role in Gangs of Wasseypur but before finalizing him the makers auditioned him for 8 hours.

7. He has also worked in TV serials like Time Bomb 9/11 with Rajeev Khandelwal, Kay Kay Menon, and Rajat Kapoor in the leads, Powder and Sarojini – Ek Nayi Pehal.

8. His first feature Bollywood film as the main lead was Gurgaon which also starred Akshay Oberoi and Ragini Khanna.

12. Tripathi is also known as the ‘King of Digital Space’ for his outstanding performances in web series like Sacred Games with Saif Ali Khan, Nawazuddin Siddiqui and Kalki Koechlin and Criminal Justice with Vikrant Massey and Jackie Shroff in the lead roles.

14. He has also acted in various biographical films like Gunjan Saxena: The Kargil Girl based on the real-life of Indian Air Force pilot Gunjan Saxena starring Janhvi Kapoor and Angad Bedi and Super 30 based on the life of Anand Kumar featuring Hrithik Roshan and Mrunal Thakur.

15. Pankaj’s most commercial hit web series was Mirzapur for which he won the Indian Television Academy Awards for Best Actor in a web series.

16. His upcoming movies are 83, starring Ranveer Singh and Deepika Padukone as the lead and Bachchan Pandey with Akshay Kumar, Kriti Sanon and Jacqueline Fernandez.

1. Pankaj Tripathi is currently shooting for his upcoming film OMG – Oh My God! 2, which also features Akshay Kumar and Yami Gautam in the lead roles. In an interview, he was asked about the controversies which surrounded the first film of this franchise, to which he replied “as an actor you have to take such risks if you want to achieve success“.

OMG – Oh My God! 2 since its shooting, it has remained in the news. Furthermore, the movie has been criticized by several religious authorities as they believe that it may hurt their religious sentiments.

2. Tripathi in an interview mentioned “The movies in which he was replaced, eventually turned out to be a disaster at the box office”. Though the Mirzapur star said this statement with utmost sincerity, several netizens trolled him for his arrogance.