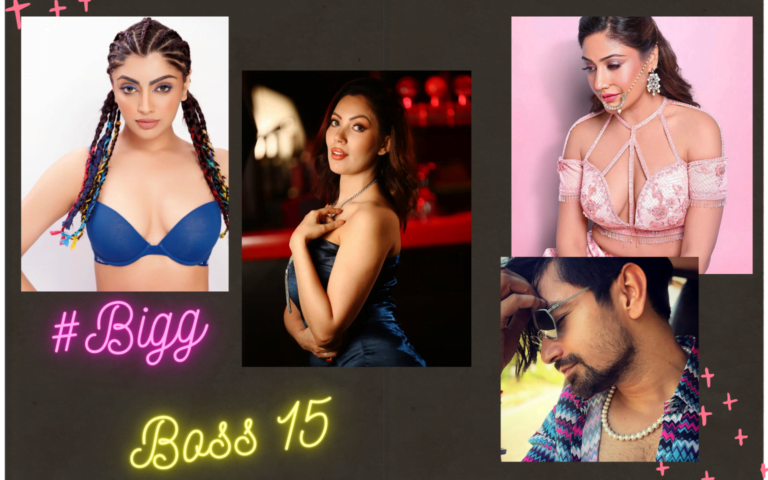 Surbhi Chandna is a fabulous actress known for her gleaming personality and astounding looks, she rose to prominence with her remarkable performance in Star Plus highly successful Tv show Ishqbaaaz where she played the role of Anika Oberoi.

However, she has also starred in a couple of hit Tv shows like Sanjivani and Colors TV superhit series Naagin 5 where she played the notable role of Bani Singhania.

It would be interesting to see how one of the Times Most Desirable Women on TV, bedazzles everyone with her enthralling looks in the Bigg Boss 15 house which already has contestants like Karan Kundrra, Nishant Bhat, and Shamita Shetty.

Who doesn’t know ‘Babita Ji’ from the very famous and popular super-duper hit Indian comedy Tv show Taarak Mehta Ka Ooltah Chashmah. Munmun Dutta, known for her marvellous personality, captivating looks, and sparkling beauty, has made a household name for herself in a short period.

Apart from her acting prowess, she is considered the fashion diva of the nation, owing to her elegant and dazzling dressing sense.

Munmun Dutta’s entry into the Bigg Boss 15 house will be an enthralling ride for the fans where her fascinating looks and a completely different side of her will be witnessed.

The 36-year-old Tv actor has delivered some flawless performances on Indian Tv starting from his debut role as Aayan Nanda in the commercially hit show titled Kuchh Is Tara. The show beautifully portrayed a romantic love story with a blend of twists and turns.

Moreover, Vishal Singh then went on to feature in several hit Tv shows like Kasamh Se, Kumkum Bhagya, and Saath Nibhaana Saathiya where he played the significant role of Jigar Modi alongside fellow actress Devoleena Bhattacharjee.

It would be a pleasure to see vivacious Vishal Singh inside the house of Bigg Boss 15 alongside contestants like Tejasswi Prakash, Umar Riaz, and Rashami Desai.

Akansha Puri is a known face in the film industry, especially in the Tamil and Malayalam film industry where she marked her debut with massive commercial hit Alex Pandian which also starred Karthi and Anushka Shetty in the lead roles.

Akanksha has also starred in other south language films like Tihar, Praise the Lord, Lodde, and Action. All these movies made a significant impact on the box office.

However, she marked her Bollywood debut with Madhur Bhandarkar’s Calendar Girls which proved to be a financial disaster. And, her portrayal of Goddess Parvati in Sony Tv mythological series Vighnaharta Ganesha provided a new dynamic to her acting prowess.

Akanksha’s entry into the Bigg Boss 15 house will prove to be full-on entertainment for the fans, as her voguish looks will glue her fans to their screens.

ALSO READ: 7 Facts of Rashami Desai which will Make Your Jaw Drop!