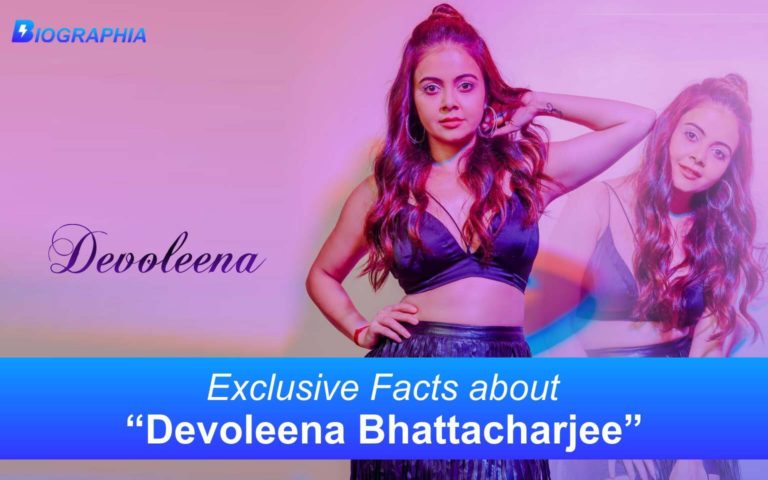 Devoleena Bhattacharjee is quite famous for the portrayal of her iconic character ‘Gopi Modi’ in the superhit romantic drama Tv show Saath Nibhaana Saathiya. The show not only gave Devoleena a novel identity but made the whole country acquainted with her fathomless acting flair.

Devoleena appeared as a challenger along with Rashami Desai in the contentious reality Tv show Bigg Boss 15, which also featured other contestants like Karan Kundra, Shamita Shetty, Tejasswi Prakash, and Vishal Kotian.

1. Devoleena after her exit from Bigg Boss 13 due to her deteriorating health, started receiving hurtful and life-threatening messages on her social media profiles from the trolls. As, one of the messages explicitly mentioned that if Arhaan Khan, one of the contestants in Bigg Boss 13 got insulted by her anymore, she had to repay with her life.

However, Devoleena soon understood the gravity of the threat and complained regarding it, to the Mumbai Police and Cyber Crime Unit.

2. Devoleena also made a shocking revelation regarding the relationship between TV actors Gagan Gabru and Late Divya Bhatnagar. Through her, Instagram account Devoleena mentioned that Gagan used to physically assault and gave her late wife Divya mental stress.

3. Devoleena and the TV actress Nia Sharma were caught in a Twitter battle on the TV actor Pearl V. Puri rape case, where the latter had molested and raped a minor in 2019. However, Nia showed her support for Pearl as she believed it was a wrongful accusation, on the other hand, Devoleena believed Pearl to be the culprit and demanded the people raise their voice against the gruesome crime of rape.

This opposite confrontation between Devoleena and Nia led to a verbal spat between them, where both the actresses tried to defame the other through their mean comments and replies.

4. Devoleena’s name was also caught up in the murder conspiracy of diamond trader Rajeshwar Udani. As, Saath Nibhaana Saathiya actor’s name was found on the mobile phone of the dead, which led the Mumbai’s Pant Nagar Police to call her for questioning.

Furthermore, after a few days of questioning, Devoleena’s name was cleared from the list of suspects by the police.

1. Not a lot of people are familiar with the fact regarding Devoleena that she is a fabulous and magnificent Bharatnatyam dancer and had auditioned on the popular dance reality Tv show Dance India Dance Season 2, which was hosted by Jay Bhanushali and Saumya Tandon, and the judges were Remo D’Souza, Terence Lewis, and Geeta Kapoor.

2. In Flipkart’s Ladies Vs Gentlemen Season 2, hosted by Riteish Deshmukh and Genelia Deshmukh, Devoleena, who was featured as a panellist, revealed a traumatized incident of her childhood, where her Mathematics tuition teacher misbehaved and tried to violate her dignity.

3. Before, embarking on her acting journey on the small screen, Devoleena earned her bread and butter as a jewellery designer in a public sector company.

4. Devoleena has a strong infatuation for tattoos, as it’s evident from her wrists, back, mid-riff, and left foot were, she had engraved them and each of them symbolises quite specific things in her life.

5. Everyone knows her for the character of ‘Gopi’ which she portrayed in one of the longest-running daily soap operas of Indian television Saath Nibhaana Saathiya, But, it was not her first Tv show, as she marked her debut on Indian television with Imagine TV’s hit show Sawaare Sabke Sapne…Preeto.

6. Devoleena is a huge admirer of dogs and her Instagram post are mostly flooded with her pet dog photos, she has adorably named ‘Angel’.

7. She is the only TV celebrity ever, to enter the house of Bigg Boss as a contestant in its three consecutive seasons, 13, 14, and 15. In the latest season of the quarrelsome reality TV show Bigg Boss 15, it would be interesting to see, how her journey goes in the house, which already consists of celebrities like Umar Riaz, Pratik Sehajpal, Nishant Bhat, Rajiv Adatia, and Neha Bhasin.

1. Vishal Singh – Devoleena and Vishal met each other on the sets of Saath Nibhaana Saathiya. Initially, both developed a healthy friendship bond but, it was soon enough they understood their lovable chemistry and began dating one another.

Educational Qualification: B.Com (Honours) in Accounting and Finance and B.Des. in Fashion Designing